Top 7 Famous Temples in Konkan You Must Visit 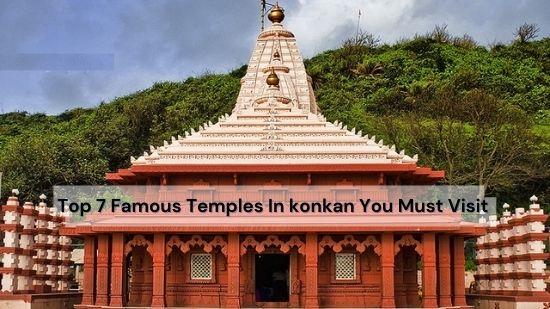 One cannot describe the beauty of Konkan in a few words; you have to visit it at least once to know what a beauty it is. Whether it is the serene and clean beaches, the blanket of green till your eyes can see, the delicious food, waterfalls, the breath-taking ruins or temples that awaken you spiritually, these all things make Konkan even more charming. Greenery, waterfalls, food are some things that people know about Konkan, but very few know that the Konkan region is home to many beautiful and powerful temples in the state. You will fall in love with the architectural beauty along with the spiritual experience you get praying in the temple hall. Some of the famous temples in Konkan are very small and located in some quaint villages of the region. Here are some of the temples that you should visit while in Konkan.

Shri Chandika Devi Temple is located approximately 30 kilometres from Dapoli in a town named Dabhol. The naturally formed (swayambhu) deity of Devi is one of the many things that makes this temple special. However, apart from the naturally formed deity, the temple is in an underground natural cave making the temple more raw and real. Another thing that sets this temple apart is that there is no electricity inside the temple; the only form of light is through the oil lanterns lit around the temple. The view of the temple deity in the soft glow of these oil lamps makes the whole experience worthwhile.

If you are talking about Konkan, then the Ganpatipule temple has to come up. Ganpatipule temple is one of the famous temples in Konkan area and is frequented by thousands of devotees every year. Ganpatipule Temple is one of the ‘Ashta Ganapati’, i.e., eight Ganapati’s in India. Every year, thousands and thousands of devotees visit this temple to pay respect to the self-incarnated Lord Ganesha deity here. It is believed that the deity of Lord Ganesha sprung up from the earth more than 400 years ago. This temple is also unique as it is one of the few temples in the country where the deity faces the west side or Paschim Dwardevata.

You will get an opportunity to observe the architectural marvel of the Peshwa period while visiting Keshavraj Temple. Located around 8 kilometres from Dapoli on Harnai Road, visiting this temple will surely rejuvenate your senses. You have to do a small trek and climb 150-200 odd steps to reach the temple. The trek as a whole is a scenic experience; you will have to trek through the coconut trees, beetle nut and mango trees; you also have to cross a small beautiful creek to reach the temple. As soon as you approach the temple, Lord Vishnu’s idol that is gleaming in the soft lights of the oil lanterns lit around it will captivate you. Apart from Lord Vishnu, you will also be able to pay your respect to Lord Ganesh in the temple vicinity.

Visiting the Shree Vyaghreswar temple, you will be able to see the beautiful Hemadpanthi style architecture. The temple located on the riverbank is believed to be 1000 years old and is considered the family God (Kuladaiwat) of many Chitpavan Kokanastha Brahmins, mainly the Ranades clan. The sacred sanctum is devoted to Lord Shiva, which houses a self-emerged (swayambhu) Shivling. In addition, you will get to see the beautifully carved wooden pillar in the canopy outside the temple. Apart from Lord Shiva, you can also pay your respect in a small temple dedicated to Lord Kalbhairav on the premises of the temple. Outside the wall of the temple, you can pray to Shree Zolai Devi, who is the guardian goddess of the village.

Harihareshwar Temple is one of the popular pilgrim places in Maharashtra. The temple is one of the notable and ancient temples in the Konkan belt. There are two temples adjacent to each other on the same premises. While visiting the temple, it is customary to visit the Kalbhairav temple first, and then you should pay respect to the Lord Shiva temple next to that and then again pay tribute to Lord Kalbhairav. The temple was constructed in the late medieval period with unique and beautiful Maratha style traditional Indian architecture. The deity in the temple is Kuladaiwat (Family or clan God) of the Peshwas. Harihareshwar is the temple that needs to be visited if you are exploring the Konkan region.

Kunkeshwar Temple is located at the Kunkeshwar village in the Konkan belt; this Lord Shiva temple overlooks the Arabian Sea. A serene beach surrounds the temple, and the beautiful stretch of white beach sands enhances the beauty of the temple. This temple is known to be the Kashi of the Southern part of Konkan. Every year you will be able to enjoy and experience the festival of Mahashivratri in a different way here at Kunkeshwar Temple. It is believed the Chhatrapati Shivaji Maharaj used to visit this temple frequently.

Durgadevi Temple is one of the oldest temples in Guhagar, which is in the Ratnagiri district in the Konkan belt. This ancient temple is surrounded by greenery and a large lake. The main deity of the temple is Goddess Durga which is at the centre of the temple; surrounding the main deity of Goddess Durga, there are four other shrines of Lord Ganesh, Lord Surya, Lord Shiva and Lord Vishnu, along with Goddess Laxmi, making it a Panchayatana temple. In the Panchayatana style of temple, the layout is such that four subsidiary shrines surround the main shrine at four different corners of the temple.
These are some of the famous temples in Konkan which one should visit. Konkan belt is known for some of the beautiful beaches and ancient temples with beautiful traditional Indian architecture. We should make it a point that while seeing them, we maintain the decorum of the temple and follow the rules and rituals attached to the temple.